Interview on the occasion of the NOTEBOOKS exhibition in Living with Art gallery, Soho, New York / February 12 – March 28, 2009

“The notebooks contain my favorite founding myths, my personal heroes, both real and imagined. They are like a case-study folio, retaining all the original notes, observations, traces and clues used during the analysis of these subjects and stories so dear to my heart.” Bruce Thurman – Interview by Joelle Deroy, New York, January 2009. 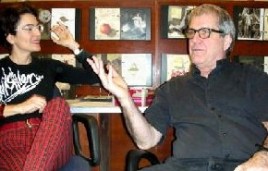 Bruce Thurman: “Well, notebooks are sort of bipolar, there are two pages usually in a notebook, which often have nothing to do with each other, like a magazine too, you turn a page and on one side there is publicity and on the other side there’s text. It’s a way of doing a work that has a right brain/ left brain duality in it but avoids being schizophrenic. It’s difficult to have too many different styles going on in the same painting–they struggle with each other… but if you take that same painting, cut it half and hang them side by side, it works fine. The notebooks are a way of allowing maximum variety of expression. I can go from photo realism, to abstract expressionism, to gesturalism, to minimalism, which is what I’ve been doing lately, using one of the two pages as a more conventional figure for a base and the other page as more abstract or theoretical, which may or may not have something to do with the image. Sometimes it does, sometimes it doesn’t.

“The point is, that these notebooks come from a very long tradition. They were used by every profession for centuries for the taking of notes and ordering of thoughts.

I always liked secrets. In this notebook you can see there’s something written behind it, it gives you the impression that the pages could be turned any moment and that you could find something else behind.

“Well, I really take my subjects wherever I can. I have painters that I love, Titian or Raphael or Velasquez or Rembrandt, I have my little collection of painters I honor, I steal from. Picasso said that theft was the greatest compliment one could pay. I love the 30’s and 40’s, yes and the 50’s too. I don’t like the 60’s and I abhor the 70’s. I need to think about that.

As an unreformed romantic who doesn’t want to grow up, and who remembers the world at age 5, I was impressed by the symbols of my fathers’ generation. The sports figures or the glamorous women of those times are very attractive to me, no matter how good or bad they really were in fact. So these things are rehashes.

I think we all are more vulnerable when we’re young, later in life we start liberating ourselves, we try to, we should try to, but there’s a lot of residue that hangs on. My love affair with France for instance had a great deal to do with my father. He served in World War II in France and the stories I heard when I was young, my vision of the world from a post World War II is part of everything.”

When did you realize you were a painter ?

“I suppose I became a painter when I realized I had to become a something and I wasn’t likely to be much of an anything else. I liked history, and have been interested in many things since then, I was one of those people who had kind of a certain graphic sense for my young age and not much else. I slipped towards architecture as there was a part of me that was very interested in building and construction. Many people in the arts consider architecture to be the greatest of all of the arts, and when it is carried out under the best conditions I agree with that. So that was a wonderful thing for many years and I still have an architect’s soul but as my life progressed I started being more and more drawn to the painters, the museums and to the world that they inhabited, and hopefully to the paradise that they were going towards… that one day I would be with the Van Gogh and the Rembrandt, . . . ”

“I never believed in the labeling of art as abstract or figurative.

Someone came in to meet just an hour ago and said about this notebook (with a stool cut out on it): “Oh! You know what it is, the stool is real like the girls legs, painted right next to it..” This was unintentional . . . and she’s right!